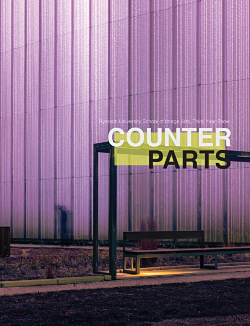 Counterparts, the sixteenth annual Third Year Show produced by students in the School of Image Arts, again took place in the exhibition space on the third floor of the Gladstone Hotel on Queen Street West.

The Curatorial Committee introduced the work with a brief essay:

Counterparts is an exhibition of photographic work created by third year students in the School of Image Arts Photography program…. Each artist created an individual body of work that they felt depicted an aspect of the human condition. From these works, singular pieces were selected to represent various themes that collectively reflect upon seeing  oneself or others. Themes expanded upon include, but are not limited to memory, the subconscious, trauma, theatrical narratives, and the vernacular.

The ways in which humans see themselves and others gradually link together…much like a puzzle…..

This collection of work comes together with the intention of demonstrating how the human condition is made up of a series of counterparts, as each individual image has an influence on how everything comes together as a whole.

As with the 2016 exhibition, the varying dimensions of the Gladstone exhibition spaces led to an interesting mix of approaches and to wide variation in the scale of work on display. In addition to the themes mentioned above, many other elements of the show proved compelling: aspects of the gaze, aspects of expression; questions of meaning, presence and absence; the figure and the body; image and memory, setting and scene, personal space; and narratives of time and being—all these elements of the exhibition were examined as part of the class presentation included here to accompany the exhibition catalog.