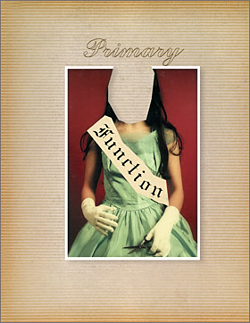 Function was established in 1998 by a group of students in Image Arts and Graphic Communications Management, who shared the conviction that it was a project worth doing. They were told it wasn’t possible on the scale they envisioned; but, like determined people everywhere, they didn’t listen.

In the fall of 2002 the new editorial team was told function couldn’t continue; funding sources had dried up, it wasn’t a joint venue anymore, the world was a different place, the university’s finances… but they had already stopped listening. What they did instead was build the publication from scratch, publish zines, hold fundraisers, have exhibitions, assemble a web team, and raise money in record amounts. The hard-copy publication is back, this year titled Primary Function, and is also available on the web at www.function.ryerson.ca. So one should begin by thanking the editors for not listening, and by thanking this year’s contributors – for listening to the editors, and not to us.

Many distinguished artists visited Ryerson this year, thanks to the sponsorship of Kodak Canada. Of these, Lynne Cohen, Robert & Shana Parkeharrison, Jennifer Baichwal, Angela Grauerholz and Jonas Mekas kindly consented to be interviewed for Primary Function, and the interview excerpts published here make a welcome addition to the publication. Fuller texts of their lectures and an archive of all available Kodak Lectures can be found at www.ryersonlectures.ca.

What the affirmation that this issue represents – of the arts, of education, of the creative process, of individual effort – seems somehow especially important in the uncertain spring of 2003. Thank you again, to those whose perseverance made it possible.