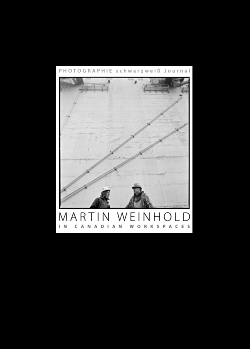 This ten-year project, rare in contemporary photography and unique in Canada, began in April 2006 with these portraits of Ben Cleveland, a truck driver and self-styled country-music singer. Weinhold was making his fourth visit to Canada and starting to photograph seriously there, and Cleveland was a neighbor in the artist co-op where Weinhold was staying. Weinhold was struck by Cleveland’s openness about who he was and what he did, and an invitation to make pictures at Cleveland’s workplace made him realize he would have a freedom in Canada to document working people and working spaces in ways no longer possible in Germany.

The title WorkSpace Canada was first used for a 2007 CONTACT exhibition in Toronto, and it identifies a theme that came to define the project: the visual geography of work in Canada. As Weinhold put it, “work is the basis of the entire society here, yet there are no real models for how it is portrayed. There are relationships between figure and space here that do not exist in Europe, as that continent is nearly settled…. And I see the people I photograph [subject to] two dramatic conflicts: being exposed to space and time, and being forced to make a living.”

Weinhold says he was “hooked” on this idea in 2007, and that by 2008-2009 it had grown to be national in scope. Since that time he has traveled extensively, making six regional trips in as many years, for weeks or months as the situation demanded. This catalog provides an introduction to the document that has grown out of these journeys, with images from the last five of Weinhold’s Canadian itineraries. Through these beautifully designed black and white sequences, the viewer can also travel, from mines to small businesses, from factories to offices, from prairie regions to oil rigs, and from there to ranches and cattle-raising operations. The journey is continued as the spaces grow more open: road building, bush plane hunting and fishing, Great Lakes freight shipping and Maritime fisheries are also explored, and the series concludes in Hudson’s Bay and the far north, where the work of native communities goes on in the vast spaces of the Arctic, and in the small villages that provide shelter for the people who live and work there.