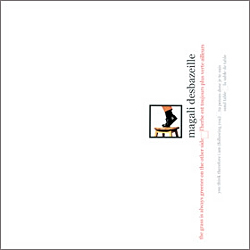 
The Work of Magali Desbazeille

With three sharply-drawn images from 19th century literature, Leo Marx summarized the intrusion of machine technology into the pastoral consciousness of a younger North America:

We recall the scene in Walden when Thoreau is sitting rapt in a revery and then, penetrating his woods like the scream of a hawk, the whistle of the locomotive is heard; or the eerie passage in Moby-Dick where Ishmael is exploring the innermost recesses of a beached whale and suddenly the image shifts and the leviathan’s skeleton is a New England textile mill; or the dramatic moment in Huckleberry Finn when Huck and Jim are floating along peacefully and a monstrous steamboat suddenly bulges out of the night and smashes straight through their raft. [1]

“More often than not in these episodes,” Marx states, “the machine is made to appear with startling suddenness.” And once it has appeared, society’s reactions to it and to the technology it embodies begin to shift: three chapters later, Marx refers to an “intoxicated prose” which “seems to rest on the simple but irresistible logic of first things first: all other hopes, for peace, equality, freedom, and happiness, are felt to rest upon technology.” [2]

Further on, however, Marx describes a different perception of this same technology, now laced with disillusion:

The outcome of Walden, Moby-Dick and Huckleberry Finn is repeated in the typical modern version of the fable; in the end the…hero is either dead or totally alienated from society, alone and powerless….

He continues with the observation that “to change the situation we require new symbols of possibility… the creation of those symbols is in some measure the responsibility of artists….” [3] While The Machine in the Garden ends with an emphasis on the social and political consequences of technology’s sudden arrival, the idea of “new symbols of possibility” has many implications for the arts, particularly at present.

In our own time the computer has intruded as quickly into our consciousness as the steamboat that tore apart Huck’s raft. Even a quick look at the rhetoric of titles that span the computer revolution shows the same cycle of sudden appearance, positivist epiphany and eventual disillusion that Marx traces out for us. Tracy Kidder’s The Soul of a New Machine (1981) vividly captured the spirit of invention at a company that no longer exists; Steven Levy’s INSANELY GREAT: The Life and Times of Macintosh, the Computer That Changed Everything (1993) represents, at least in its title, an ‘intoxicated prose’ of the computer era; and Simon Garfinkel’s recent jeremiad, Database Nation: The Death of Privacy in the 21st Century (2000) proclaims the same alienation and individual powerlessness that is the concluding theme of The Machine in the Garden. At this point in the computer era, many would agree with Andreas Vowinckel, who describes our mediated world in these terms:

Human beings are still running away from themselves, escaping into “pictures” of a reproduced reality, a reality… in which we believe more readily than in ourselves and our real [lives]….

“The pictures,” writes Vilem Flusser, “nourish themselves…. A new kind of traffic has evolved, a feedback between image and event.” … The desire for sensational imagery and lust for new pictures, which leads in the end to repetition and boredom, brings Vilem Flusser to the conclusion that “The interaction between people and images is heading for entropy, for death.”[4]

We find ourselves again in need of new symbols of possibility, and again believing that at least some of these symbols will result from the effort of artists. Each of the works that Magali Desbazeille brought to Ryerson this year, and the installation that she created while in residence here, point in this direction. Her machines, although technologically complex, are neither alienating nor unfriendly; her works make possible entirely new kinds of interaction between people and images; and most important, the works are humanist in spirit and affirmative of the value of individual thought and action.

The elegant Cartesian logic of You think therefore I am (following you) gives us access to “the flow of inner thoughts in the closeness of a crowd,” according to Desbazeille. Participants walk over an image of projected video, which shows pedestrians, filmed beforehand from underneath a transparent floor. As each participant (the piece can be viewed/experienced by many individuals simultaneously) synchronizes movement with the steps of a figure in the video, the thoughts of that individual suddenly become audible: the most complex of sensing and recording technologies are used to communicate universal messages. In her notes for the work, Desbazeille says, simply, that “we don’t speak as we think… inner thoughts are unrestrained. They jump from one subject to another…. The spectator is surprised by these fragmented inner thoughts and smiles to himself. Is he revealed despite himself?” Here is a new symbol of possibility: the technology of surveillance utilized for the sharing of thought, providing access to the inner voices that are part of our collective human dialogue.

The sand table collaboration, from a longer performance/interactive piece, Highway 101 (with Meg Stuart/Damaged Goods Company), blends the traditions of sand painting, performance and video installation in a startlingly fresh way. Video footage, usually of two prone figures, is projected onto a glass table covered with sand. During the projection, live performers (dancers) manipulate the sand and therefore the projected images. These images, of real individuals, change shape and relative position, metamorphosing into a variety of new images as the sand is shifted, lifted, or even scraped away from the table, at which point a part of the image seems to “disappear through the glass …and fall on the floor.” Live dancer and filmed dancer become participants who interact with each other in the real time of the video work. Technologies of great sophistication are combined with an ancient material and a practice at least as old as Tibetan sand painting, in which the mandalas are scraped away and the sand heaped together as soon as the work is complete. Ritual and dance, interaction and performance work together here to realize a new vision, where the machine is used intelligently, not for the sake of its own power, but simply to make the work possible.

The grass is always greener on the other side, made for and installed at the Ryerson Gallery in February 2001, represents another bringing together of the psychologically revealing and the technologically complex. Video footage of the back wall of the gallery is projected, actual size, on the wall itself. We observe figures moving into the frame as they approach the wall and consider what might be behind it. They look, briefly or for a longer time, and then they might attempt to scale the wall, sometimes by jumping, other times by using a stool or a ladder. The few who manage to get a grip on the top molding are suddenly shown (over the viewer’s right shoulder) above the gallery entrance door: we see their faces staring down at whatever is on the other side, smiling (or not) at what is there. After a few moments they jump or climb down, and their faces and hands disappear from the second projection. Eventually they walk out of the frame projected on the back wall. Occasionally, figures pass in front of the wall but do not consider climbing it. At unpredictable intervals, a perky voice asks: “Do you want some?” Other times, equally friendly, the voice inquires: “Do you want a bite?”

Desbazeille’s notes for this work ask other questions:

What do you look for? Why do you think it is more interesting here or there? Do you get up to search for something? Are you sure you are looking in the right direction? …Are you too curious or not enough? Can you admit you want to know or do you fake not caring? Would you tell everybody you are curious to look or would you just keep it for yourself?

In the half-light of the video projection, gallery visitors cast their own shadows on the wall, becoming also a part of the work. No other light compromises the beauty of the video signal, and while the work unfolds in real time, the actions of the filmed participants are slowed down by the computer. Even the simplest step or movement has a dance-like grace and stateliness, reminding one of a sarabande. Current technologies blend seamlessly with ancient forms and rhythms; new symbols of possibility are crafted here, but in a way that never discards the human element — that which gives any work of art its fundamental expression and meaning.

In the end, there is nothing behind the wall. Desbazeille points out, correctly, that people would be disappointed in anything that was actually there. We are left with the images, the environment and the questions. These questions are illuminated for us and posed to us by machines, but they are human questions at bottom. Magali Desbazeille’s works neither celebrate the machine nor inveigh against it, but look on its sudden arrival as the most natural of occurrences, and the art that the machine makes possible as the most natural of forms.

[1] Leo Marx, The Machine in the Garden: Technology and the Pastoral Ideal in America, New York: Oxford University Press, 1964, p. 15

[4] Andreas Vowinckel, THE ABSENCE OF THE PRESENCE: Concerning the Idea of Production in the Work of Jochen Gerz, in Jochen Gerz: Life After Humanism, Bremen: Neues Museum Weserburg, 1992, pp. 39-40.