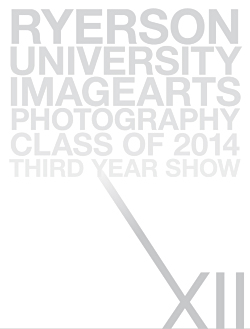 When the School of Image Arts established an off-campus gallery in the downtown Toronto arts district—originally at 80 Spadina Avenue, later at the Gladstone Hotel and now the Artspace at 401 Richmond—annual group exhibitions of student work became an integral part of the Photography Studies curriculum.

Over time, the tradition of a Third Year Show developed. By 2010, advances in digital printing and book publishing made it possible to create catalogs of student work to accompany each exhibition. Shows were generally installed during the winter term of each year, reflecting themes explored and emphasized during the course. Catalogs were distributed to each student in the program, were sold during the exhibition, and were made available for download once the show was installed. The format developed for XII became a template for future catalogs, and provided a model for showcasing exhibition activities from 2013 onward.

“The Human Subject” was the nominal title of the assignment that generated the explorations of photographic portraiture reproduced here. Individual responses to the assignment idea are reproduced in alphabetical order in the catalog itself. Themes emerging from these images emphasize differing aspects and varying possibilities of the photographic portrait: expression, environment and situation as well as body language, allegorical content, and the relationships between process and meaning.

The presentation that accompanies the catalog itself was made as a way to study and further develop these themes, and was used in both production and theory classes once the exhibition itself was installed.

Thanks to Katy McCormick and all third year production faculty